VANCOUVER, BRITISH COLUMBIA--(Marketwired - March 31, 2016) - FIRST MAJESTIC SILVER CORP. (the "Company" or "First Majestic") (FRANKFURT:FMV)(TSX:FR)(NYSE:AG)(BVM:AG) is pleased to announce its 2015 Mineral Reserve and Resource estimates for its existing mineral property assets in Mexico as of December 31, 2015. Metal prices used to estimate the 2015 reserve estimates were reduced compared to previous estimates to: $17.50/oz for silver, $1,200/oz for gold, $0.85/lb for lead and $0.85/lb for zinc.

The Company completed 36,098 metres of diamond drilling at its six operating mines in 2015, representing an 18% reduction in metres drilled compared to the prior year. For 2016, First Majestic is planning to drill approximately 65,000 metres to further define known mineralized ore bodies at its operating mines. A combination of surface and underground drill rigs will focus on assisting mining activities, definition drilling and to support future updates to the Company's NI 43-101 Technical Reports.

Metal content in the Proven and Probable Reserve category totaled 100.6 million ounces of silver, relatively unchanged from the Company's previous estimate of 101.1 million ounces of silver. The most significant change to Mineral Reserves, apart from the addition of the Santa Elena mine, occurred at La Encantada where the old tailings were upgraded from Inferred Resources to Probable Reserves following the significant improvement in silver recoveries from 15% to 70% due to the roasting of tailings. This upgrade resulted in a 48% decrease in the silver reserve grade to 143 g/t due to a 109% increase in tonnes, mostly consisting of low grade tailings. Silver metal content in the Measured and Indicated Resource category totaled 115.2 million ounces, representing a 24% decrease from 2014 estimates primarily due to the reclassification of the La Luz project as a historical resource, offset by the addition of the Santa Elena mine. In addition, the silver metal content in the Inferred Resource totaled 184.9 million ounces, representing an increase of 9% compared to previous estimates primarily due to the addition of the La Joya property which was acquired as a result of the acquisition of SilverCrest Mines Ltd.

The complete 2015 Mineral Reserve and Resource estimates for all metals, tonnage and grades are shown below in the following tables:

PROVEN AND PROBABLE MINERAL RESERVES WITH AN EFFECTIVE DATE OF DECEMBER 31, 2015

MEASURED AND INDICATED MINERAL RESOURCES WITH AN EFFECTIVE DATE OF DECEMBER 31, 2015 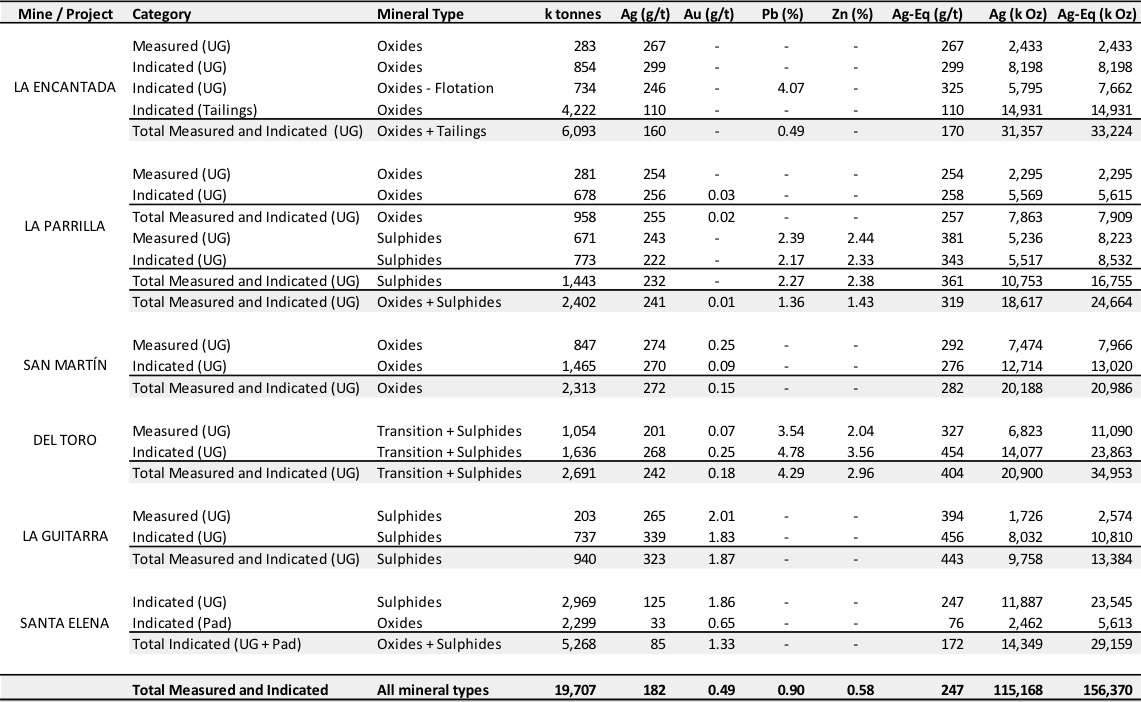 INFERRED MINERAL RESOURCES WITH AN EFFECTIVE DATE OF DECEMBER 31, 2015

(1) Mineral Resources have been classified in accordance with the Canadian Institute of Mining, Metallurgy and Petroleum (“CIM”) Definition Standards on Mineral Resources and Mineral Reserves, whose definitions are incorporated by reference into National Instrument 43-101 – Standards of Disclosure for Mineral Projects (“NI 43-101”).
(2) In all cases, metal prices considered for Mineral Resource estimates were $18.50 USD/oz Ag, $1,300 USD/oz Au, $0.95 USD/lb Pb, and $0.95 USD/lb Zn.
(3) The Mineral Resources information provided above for La Parrilla, Del Toro and San Martín is based on internal estimates prepared as of December 31, 2015. The information provided was reviewed and validated by the Company’s internal Qualified Person, Mr. Jesus M. Velador Beltran, MMSA QP Geology, who has the appropriate relevant qualifications, and experience in geology and resource estimation.
(4) Mineral Resource estimates for La Guitarra Silver Mine are based on information contained in the 2015 Technical Report compiled by First Majestic, which were updated by First Majestic with information to December 31, 2015.
(5) Mineral Resource estimates for La Encantada Silver Mine are based on the 2016 Technical Report compiled by First Majestic.
(6) Inferred Mineral Resource estimates for La Joya Project are based on the 2013 Technical Report prepared for Silvercrest.
(7) Silver-equivalent grade is estimated considering: metal price assumptions, metallurgical recovery for the corresponding mineral type/mineral process and the metal payable of the corresponding contract of each mine. Estimation details are listed in each mine section of the 2015 Annual Information Form.
(8) The cut-off grades for Mineral Resources are different for all mines. The cut-off grades are listed in each mine section of the 2015 Annual Information Form.
(9) Measured and Indicated Mineral Resources are reported inclusive of Mineral Reserves.
The Company also announces that its 2015 Annual Information Form has been filed on SEDAR.  In addition, a Form 40-F report has been filed with the United States Securities and Exchange Commission and is available on EDGAR.  Both documents are also available on the Company’s website at www.firstmajestic.com.

Mr. Ramon Mendoza Reyes, Vice President Technical Services for First Majestic, is a "qualified person" as such term is defined under National Instrument 43-101, and has reviewed and approved the technical information disclosed in this news release.