FIRST MAJESTIC SILVER CORP. (AG: NYSE; FR: TSX) (the “Company” or “First Majestic”) is pleased to announce the unaudited interim consolidated financial results of the Company for the second quarter ended June 30, 2016. The full version of the financial statements and the management discussion and analysis can be viewed on the Company’s web site at www.firstmajestic.com or on SEDAR at www.sedar.com and on EDGAR at www.sec.gov. All amounts are in U.S. dollars unless stated otherwise.

“We had excellent second quarter results with costs significantly beating guidance,” stated Keith Neumeyer, President and CEO of First Majestic. “The balance sheet has dramatically improved over the past two quarters, primarily due to the recent equity financing, the elimination of the prepayment facility and the increase in cash flows. As a result, the Company is beginning to accelerate a number of growth projects with high internal rates of return. We are increasing the underground development and exploration at La Guitarra to prepare the mine for its upcoming expansion to 1,000 tpd. We have also allocated capital to the Plomosas silver project, our first investment since its acquisition in 2012, to begin a 5,000 metre exploration program to test high priority targets. Essentially, we are planting the seeds for our next leg of growth.” 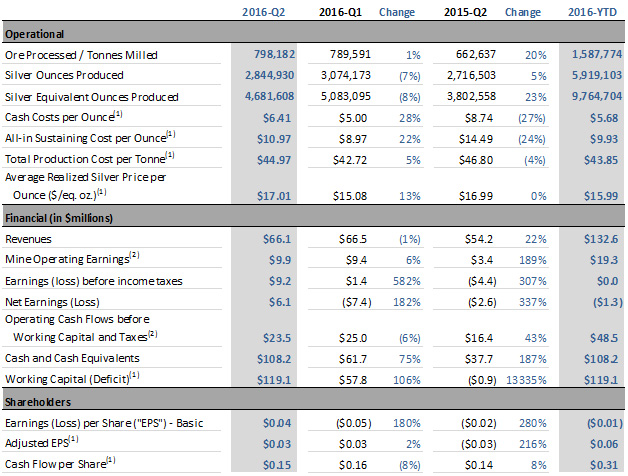 Revenues generated in the second quarter totaled $66.1 million, an increase of $11.9 million or 22% compared to $54.2 million in the second quarter of 2015. The increase in revenue was primarily due to 22% increase in silver equivalent ounces sold as a result of production from the Santa Elena mine, which was acquired in October 2015. For the six months ended June 30, 2016, even though the average realized silver price was $1.02 per ounce lower than in the previous year, revenue increased by 22% as a result of a 29% increase in silver equivalent ounces sold.

On July 12, 2016, subsequent to quarter end, the Company entered into a debt settlement agreement with First Mining Finance Corp. (“First Mining”) to settle $1.2 million in loan receivables. Pursuant to the agreement, First Mining will settle $0.5 million of the debt through issuance of 820,440 of its common shares at a deemed price of CAD$0.80 per share. The remaining balance of $0.7 million will be paid in cash in twelve equal monthly cash payments with the first installment being paid at the end of July 2016.

Consolidated AISC for the quarter was $10.97 per ounce, representing a 22% increase compared to $8.97 per ounce in the previous quarter. The increase in AISC was primarily attributed to an increases in cash cost per ounce and general and administrative expenses incurred in the second quarter. Compared to the same quarter of the prior year, AISC decreased by 24% compared to $14.49 per ounce. AISC reduced significantly due to a $2.33 reduction in cash costs per ounce, as well as decreases in sustaining capital expenditures. AISC was also lower due to the recent addition of the Santa Elena mine, which had an AISC of $1.81 per ounce in the quarter. Sustaining capital expenditures are expected to increase in the second half of the year to catch up with expanded program targets and updated capital budget.

To June 30th, the Company has produced 5.9 million ounces of silver (or 9.8 million silver equivalent ounces) with an average cash cost and AISC of $5.68 and $9.93 per payable ounce of silver, respectively. With the first half of 2016 complete, the Company is updating its 2016 production and cost guidance to include actual results over the past six months, minor operating modifications to reflect changes in throughput rates at Del Toro and La Guitarra and revisions to metal price assumptions to reflect anticipated changes in by-product equivalent ounces.

The table below details the new production and cost guidance on a mine-by-mine basis.

Due to the increase in cash flows and proceeds from the CAD$57.5 million equity financing, the Company plans to expand its development and exploration program budget by $20.9 million in the second half of the year, including an increase in planned development and exploration metres of 51% and 71%, respectively. The expanded development and exploration program applies to all of the Company’s operations and will focus to perform in-fill drilling to support underground mining activities and further delineate Reserves and Resources at each mining unit, with a significant portion attributed to expanding the Reserves and Resources at La Guitarra in preparation of the 1,000 tpd mine and mill expansion. A total of 111,344 metres in exploration drilling is now planned for 2016, of which 27,992 metres have already been completed in the first half of 2016. The remaining 83,352 metres are being allocated as follows: 8,938 metres at Santa Elena, 11,680 metres at La Encantada, 12,068 metres at La Parrilla, 8,760 metres at Del Toro, 12,706 metres at San Martin, 24,200 metres at La Guitarra and 5,000 metres at Plomosas.

In addition, the Company has budgeted several expansionary projects in the second half of 2016 with short payback periods, consisting of:

With these additional investments, the Company expects to invest a total of $88.5 million in capital expenditures in 2016, compared to its previous guidance of $63.8 million. These expansionary capital investments are expected to have a positive impact on the Company’s financial and operating results in 2017.

A conference call and webcast will be held today, August 10, 2016 at 10:00 a.m. PDT (1:00 p.m. EDT) to review and discuss the second quarter results. To participate in the conference call, please dial the following: