First Majestic Silver Corp. (“First Majestic” or the “Company”) is pleased to announce the updated Mineral Reserve and Resource estimates for its portfolio of properties in Mexico as of December 31, 2013. The mineral Reserve and Resource estimates were calculated using US$24.00 per ounce silver, US$1,400 per ounce gold, US$0.95 per pound lead and US$0.90 per pound zinc.

The Company also announces that its 2013 audited financial statements have been filed on SEDAR. In addition, a Form 40-F report has been filed with the United States Securities and Exchange Commission and is available on EDGAR. Both documents are also available on the Company’s website at www.firstmajestic.com.

HIGHLIGHTS In general, the tonnage for Mineral Reserves for the individual mines have decreased by 5% due to depletion and reclassification of Reserves into Measured and Indicated Resources in response to lower metal prices compared to the 2012 estimates. The Company has used US$24.00 silver prices with a cut-off of December 31, 2013, which impacted cut-off grades resulting in a reduction in the size of some ore blocks or conversely reclassification of ore blocks into lower categories. Total silver Reserves/Resources were reduced by 10% while total equivalent silver Reserves/Resources were reduced by 4%.

In 2014, First Majestic plans to invest $8.0 million on exploration activities. The main priority of the exploration work is to further define and upgrade Resources to support future updates to the Company’s NI 43-101 Technical Reports. As a result of the exploration budget cuts in 2013, and reduced programs in 2014, no grassroots or greenfields drilling is taking place. All drilling is either focused on mining activities or definition drilling.

The following table contains the Mineral Reserve and Resource as of December 31, 2013. 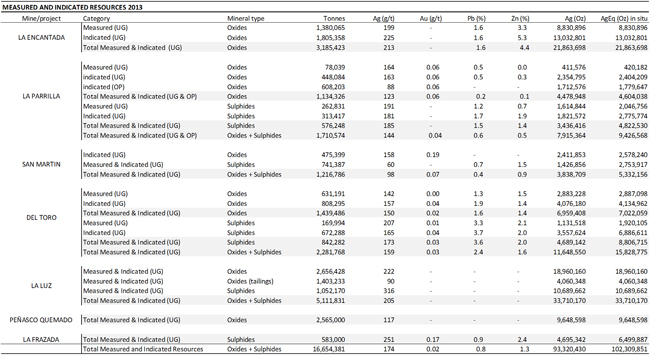 TONNAGE AND OUNCES MINED IN 2013

This press release contains “forward-looking statements”, within the meaning of the United States Private Securities Litigation Reform Act of 1995 and applicable Canadian securities legislation, concerning the business, operations and financial performance and condition of First Majestic Silver Corp. Forward-looking statements include, but are not limited to, statements with respect to the future price of silver and other metals, the estimation of mineral reserves and resources, the realization of mineral reserve estimates, the timing and amount of estimated future production, costs of production, capital expenditures, costs and timing of the development of new deposits, success of exploration activities, permitting time lines, hedging practices, currency exchange rate fluctuations, requirements for additional capital, government regulation of mining operations, environmental risks, unanticipated reclamation expenses, timing and possible outcome of pending litigation, title disputes or claims and limitations on insurance coverage. Generally, these forward-looking statements can be identified by the use of forward-looking terminology such as “plans”, “expects” or “does not expect”, “is expected”, “budget”, “scheduled”, “estimates”, “forecasts”, “intends”, “anticipates” or “does not anticipate”, or “believes”, or variations of such words and phrases or state that certain actions, events or results “may”, “could”, “would”, “might” or “will be taken”, “occur” or “be achieved”. Forward-looking statements are subject to known and unknown risks, uncertainties and other factors that may cause the actual results, level of activity, performance or achievements of First Majestic Silver Corp. to be materially different from those expressed or implied by such forward-looking statements, including but not limited to: risks related to the integration of acquisitions; risks related to international operations; risks related to joint venture operations; actual results of current exploration activities; actual results of current reclamation activities; conclusions of economic evaluations; changes in project parameters as plans continue to be refined; future prices of metals; possible variations in ore reserves, grade or recovery rates; failure of plant, equipment or processes to operate as anticipated; accidents, labour disputes and other risks of the mining industry; delays in obtaining governmental approvals or financing or in the completion of development or construction activities, as well as those factors discussed in the section entitled “Description of the Business - Risk Factors” in First Majestic Silver Corp.’s Annual Information Form for the year ended December 31, 2013, available on www.sedar.com, and Form 40-F on file with the United States Securities and Exchange Commission in Washington, D.C. Although First Majestic Silver Corp. has attempted to identify important factors that could cause actual results to differ materially from those contained in forward-looking statements, there may be other factors that cause results not to be as anticipated, estimated or intended. There can be no assurance that such statements will prove to be accurate, as actual results and future events could differ materially from those anticipated in such statements. Accordingly, readers should not place undue reliance on forward-looking statements. First Majestic Silver Corp. does not undertake to update any forward-looking statements that are incorporated by reference herein, except in accordance with applicable securities laws.