VANCOUVER, B.C., Nov. 02, 2017 (GLOBE NEWSWIRE) -- FIRST MAJESTIC SILVER CORP. (NYSE:AG) (TSX:FR) (the "Company" or “First Majestic”) is pleased to announce the unaudited interim consolidated financial results of the Company for the third quarter ended September 30, 2017. The full version of the financial statements and the management discussion and analysis can be viewed on the Company's web site at www.firstmajestic.com or on SEDAR at www.sedar.com and on EDGAR at www.sec.gov. All amounts are in U.S. dollars unless stated otherwise.

“In the third quarter, we delivered higher production levels resulting in an increase in revenues and operating earnings compared to the prior quarter,” stated Keith Neumeyer, President and CEO of First Majestic. “In addition, we successfully renegotiated our smelting and refining terms which reflected in a significant 42% savings in treatment costs in the quarter. However, lower lead production at Del Toro and La Parrilla reduced by-product credits, and along with a stronger Mexican Peso, resulted in a slightly higher AISC. We remain focused on developing our key growth projects, most importantly our roaster project, which is expected to significantly increase production levels at La Encantada beginning in the second quarter of 2018.” 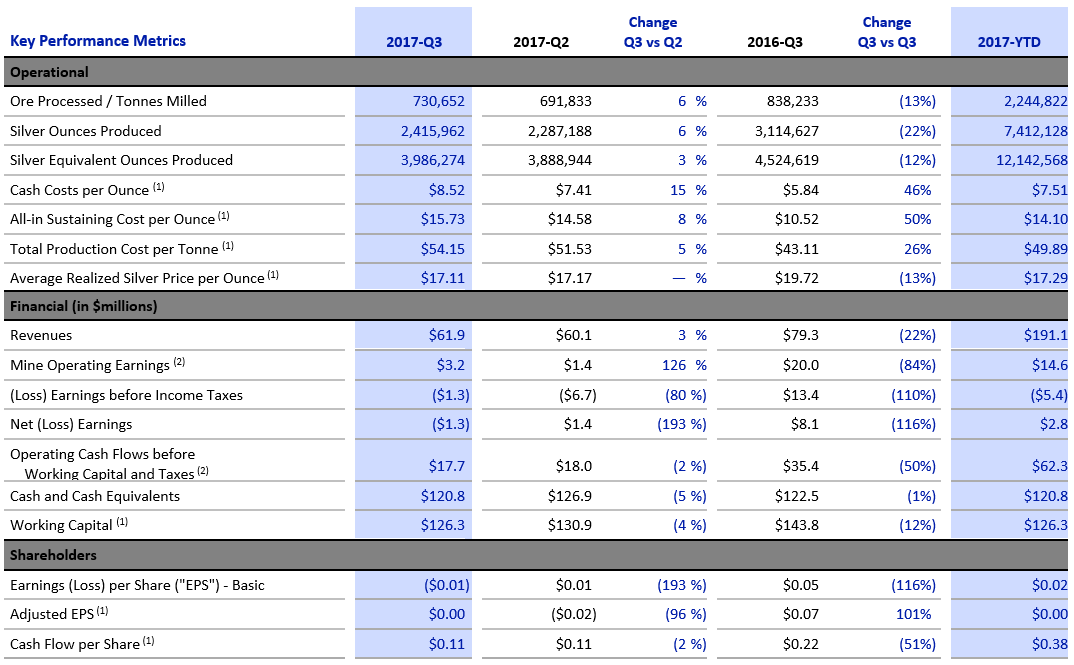 (1) The Company reports non-GAAP measures which include cash costs per ounce, all-in sustaining cost per ounce, total production cost per ounce, total production cost per tonne, average realized silver price per ounce, working capital, adjusted EPS and cash flow per share. These measures are widely used in the mining industry as a benchmark for performance, but do not have a standardized meaning and may differ from methods used by other companies with similar descriptions.
(2) The Company reports additional GAAP measures which include mine operating earnings and operating cash flows before movements in working capital and income taxes. These additional financial measures are intended to provide additional information and do not have a standardized meaning prescribed by IFRS.

The Company generated a net loss of $1.3 million (loss per share of $0.01) in the third quarter compared to net earnings of $8.1 million (EPS of $0.05) in the third quarter of 2016. The decrease in net earnings was primarily attributed to: 1) $16.8 million decrease in mine operating earnings; partially offset by: 2) a $3.3 million favourable variance in foreign exchange gains; and 3) a $5.3 million decrease in income tax expenses. Excluding all non-cash and non-recurring items, the Company generated an adjusted loss of $0.2 million (adjusted loss of $0.00 per share) during the quarter.

Cash cost per ounce in the quarter was $8.52, an increase of 15% compared to the previous quarter. The increase in cash cost per ounce was primarily attributed to lower by-product credits from lower lead production and a stronger Mexican peso which appreciated 4% against the U.S. dollars, partially offset by a 42% savings in smelting and refining costs per ounce as a result of renegotiated concentrate agreements that were effective on July 1, 2017.

For the first nine months of 2017, cash costs have averaged $7.51 per ounce and remain in line with the Company’s annual cash cost guidance of $7.00 to $7.75 per payable silver ounce. In addition, as at September 30, 2017, the Company has fulfilled the 50,000 ounce threshold under the gold streaming agreement with Sandstorm Gold Ltd. (“Sandstorm”). As a result, the selling price to Sandstorm has increased to $450 per ounce from $350 per ounce.

AISC per ounce in the quarter was $15.73, an increase of 8% compared to the previous quarter. The increase in AISC was primarily due to the higher cash costs. For the first nine months of 2017, AISC have averaged $14.10 per ounce which is below the Company’s annual AISC cost guidance of $14.40 to $15.50 per payable silver ounce.

Total capital expenditures in the third quarter were $22.6 million, an increase of 39% compared to the prior quarter, primarily consisting of $4.0 million at Santa Elena, $3.4 million at La Encantada, $4.6 million at La Parrilla, $2.6 million at Del Toro, $3.2 million at San Martin and $2.6 million at La Guitarra. The increase in capital expenditures is primarily the result of a 67% increase in exploration drilling across all assets. Exploration efforts are focused on expanding resources in known structures and exploring for new deposits, including a new 6,800 metre drill program targeting the Santa Ana and San Judas veins on the Cumobabi property located south of Santa Elena. As of September 30, 2017, the Company had completed 74% of the 145,000 metres of the revised annual exploration program.

At the end of the quarter, the construction of the roaster project at the La Encantada Silver Mine was 74% complete. The project remains on budget with 64%, or $5.7 million of the estimated $8.9 million in total capital investments, having already been spent. During the quarter, detail designs for the ore and reagent feeding systems, the roasted ore discharge system and coal storage were completed. Site preparations, including excavations and pouring of concrete pads for foundations were 90% complete at quarter end. Shipment of component modules to site and the installation of the dryer and dust collection systems are expected to commence in the fourth quarter. The 2,000 tpd roaster, which is scheduled for start-up in the second quarter of 2018, is designed to increase the metallurgical recoveries of the existing tailings material by decoupling silver from manganese and other refractory minerals prior to entering the cyanidation process. Once at full capacity, annual doré production at La Encantada is expected to increase by approximately 1.5 million ounces of silver per year.

The Company also began testing microbubble flotation technology at its Central Lab at La Parrilla during the third quarter. Ore samples from La Guitarra were shipped to site and tested in a six-inch diameter pilot microbubble column. Preliminary results show metallurgical recoveries improved by up to 4% in addition to producing higher concentrate grades. Ore samples from La Parrilla are expected to undergo microbubble pilot testing in the fourth quarter of 2017, followed by Del Toro samples in the first quarter of 2018. Pending successful results, the Company hopes to begin installing full scale microbubble columns for the cleaning circuits at the various operations throughout 2018.

Underground development in the third quarter focused on opening a new production area at La Parrilla (located below Quebradillas) called the Borregos area, opening new faces at La Guitarra, new stopes at Del Toro, and developing into higher grade zones at La Encantada as a way to increase production in the coming quarters. The most significant increase in underground development occurred at La Encantada to target areas of the mine known to have higher grades, most notably the San Javier and 990 areas, as well as the San Francisco dyke. Development and reinforcement for caving in the San Javier area have been completed and vertical raises are planned to be completed in the fourth quarter. The San Javier area is expected to begin initial production by mid-2018 and produce silver grades ranging between 150 to 200 g/t. As of September 30, 2017, the Company had completed 67% of the 64,720 metres of the revised underground development planned for 2017.

At the Plomosas Silver project, three drill rigs were active on site completing 4,520 metres of diamond drilling during the third quarter, compared to 2,675 metres in the previous quarter. Surface exploration drilling is focused around the San Juan mine area. The development program continued to advance on the crosscuts for three underground drill stations and has completed 488 of the planned 520 metres. Drilling and development programs are designed to provide geological and analytical data in order to prepare a Technical Report with resource estimates and a Preliminary Economic Assessment in late 2018.

SPECIAL NOTE REGARDING FORWARD-LOOKING INFORMATION
This news release includes certain "Forward-Looking Statements" within the meaning of the United States Private Securities Litigation Reform Act of 1995 and applicable Canadian securities laws. When used in this news release, the words “anticipate”, “believe”, “estimate”, “expect”, “target”, “plan”, “forecast”, “may”, “schedule” and similar words or expressions, identify forward-looking statements or information. These forward-looking statements or information relate to, among other things: the price of silver and other metals; the accuracy of mineral reserve and resource estimates and estimates of future production and costs of production at our properties; estimated production rates for silver and other payable metals produced by us, the estimated cost of development of our development projects; the effects of laws, regulations and government policies on our operations, including, without limitation, the laws in Mexico which currently have significant restrictions related to mining; obtaining or maintaining necessary permits, licences and approvals from government authorities; and continued access to necessary infrastructure, including, without limitation, access to power, land, water and roads to carry on activities as planned.

These statements reflect the Company’s current views with respect to future events and are necessarily based upon a number of assumptions and estimates that, while considered reasonable by the Company, are inherently subject to significant business, economic, competitive, political and social uncertainties and contingencies. Many factors, both k