FIRST MAJESTIC SILVER CORP. (AG: NYSE; FR: TSX) (the "Company" or “First Majestic”) is pleased to announce the consolidated financial results for the Company’s fourth quarter and year ended December 31, 2015.  The full version of the financial statements and the management discussion and analysis can be viewed on the Company's web site at www.firstmajestic.com, on SEDAR at www.sedar.com and EDGAR at www.sec.gov. All amounts are in U.S. dollars unless stated otherwise.

“In 2015, First Majestic delivered another year of record production totaling 16.1 million silver equivalent ounces representing a 5% increase from 2014,” said Keith Neumeyer, President and CEO of First Majestic. “During the fourth quarter, our consolidated AISC fell to $11.28 per ounce, representing a significant reduction of 22% compared to the prior quarter, primarily due to the inclusion of our latest acquisition, the Santa Elena mine. In addition, we have experienced a nice start to 2016 with a renewed interest in precious metals pushing prices higher and coinciding with currency exchange weakness and increased volatility in the Mexican Peso. These two components, if sustained throughout 2016, will have a significant influence on the Company’s operating cash flows this year. With First Majestic now producing silver from six mines, we expect 2016 will be another record year of production.” 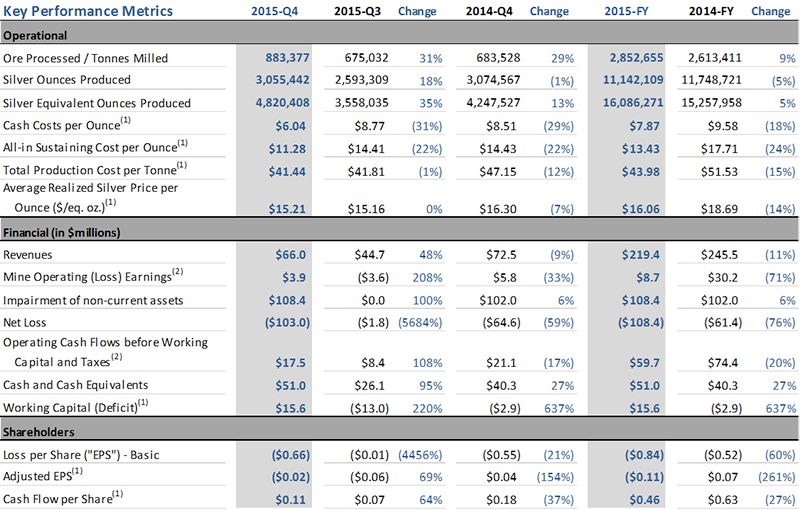 (1)              The Company reports non-GAAP measures which include cash costs per ounce produced, all-in sustaining cost per ounce, total production cost per tonne, average realized silver price per ounce, working capital, adjusted EPS and cash flow per share.  These measures are widely used in the mining industry as a benchmark for performance, but do not have a standardized meaning and may differ from methods used by other companies with similar descriptions.

(2)              The Company reports additional GAAP measures which include mine operating earnings and operating cash flows before movements in working capital and income taxes.  These additional financial measures are intended to provide additional information and do not have a standardized meaning prescribed by IFRS.

Net loss after taxes for the fourth quarter and year end 2015 were $103.0 million and $108.4 million respectively, compared to net loss after taxes of $64.6 million and $61.4 million in the comparative periods of 2014.  Net loss in the current period was attributed to non-cash impairment charges totalling $108.4 million, or $70.2 million net of tax, on certain operations and development projects due to the decline in market consensus on long-term silver price forecasts as at December 31, 2015 and the consequential impact on the Company’s Reserves and Resources. Excluding non-cash and non-recurring items, the Company recorded an adjusted loss of $3.0 million ($0.02 per share) during the fourth quarter of 2015.

The Company ended 2015 with a healthy $51.0 million in cash and cash equivalents compared to $40.3 million at the end of 2014. In addition, the Company ended the year with a surplus in working capital of $15.6 million compared to a $2.9 million deficit at the end of 2014. As previously announced on February 11, 2016, the Company further improved its working capital position by securing a $60.0 million credit facility to replace its existing lead and zinc prepayment facilities with Bank of America and replaced the maturing $15.0 million revolving credit line the Company assumed when it acquired SilverCrest Mines Ltd. with a new revolving credit line to cover the Company for the next three years.

During the fourth quarter, consolidated cash costs per ounce and AISC were $6.04 and $11.28, a decrease of 31% and 22%, respectively, compared to the previous quarter. Improvements in consolidated cash costs and AISC per ounce were primarily attributed to the recently acquired Santa Elena Silver Mine, which exceeded guidance by producing 0.7 million silver ounces and 11,110 ounces of gold for a total quarterly production of 1.5 million silver equivalent ounces at a negative cash cost per payable silver ounce of ($2.84) and AISC of $1.44 per ounce. Excluding Santa Elena, consolidated cash costs and AISC in the fourth quarter would have been $8.59 and $14.23 per ounce, consistent with $8.77 and $14.41 in the previous quarter.

Cash costs per ounce and AISC in 2015 were $7.87 and $13.43 respectively, an improvement of 18% and 24%, respectively, compared to $9.58 and $17.71 in the previous year. The decrease in cash costs and all-in sustaining costs were reflective of the Company’s ongoing effort to reduce production costs, weakening of the Mexican pesos against the U.S. dollar, as well as the addition of the Santa Elena Silver Mine to the Company’s portfolio of assets, which became the Company’s lowest cost mine. Cash costs and AISC during the year also included $0.9 million, or $0.08 per ounce, in relation to severance costs.

In 2016, First Majestic aims to maintain its status as one of silver industry’s purest and highest margin producers. The focus of the Company continues to be on producing profitable ounces. Annual silver production is expected to increase to a new record range of 12.0 million to 13.3 million ounces (or 17.8 million to 19.8 million silver equivalent ounces), primarily due to the addition of a full year’s worth of production from Santa Elena offset by lower production levels forecasted at Del Toro and San Martin. The Company is projecting its 2016 AISC to be within a range of $12.29 to $13.36 per ounce, or $11.82 to $12.84 per ounce after excluding non-cash items such as share-based payments and accretion of decommissioning liabilities.

A mine-by-mine breakdown of the 2016 production guidance is included in the table below. Cash cost and AISC guidance is shown per payable silver ounce. The production outlook includes the impact of Santa Elena’s gold streaming agreement with Sandstorm Gold Ltd.