FIRST MAJESTIC SILVER CORP. (AG: NYSE; FR: TSX) (the “Company” or “First Majestic”) is pleased to announce the unaudited condensed interim consolidated financial results for the Company for the first quarter ending March 31, 2013. The full version of the financial statements and the management discussion and analysis can be viewed on the Company’s web site at www.firstmajestic.com or on SEDAR at www.sedar.com and on EDGAR at www.sec.gov. 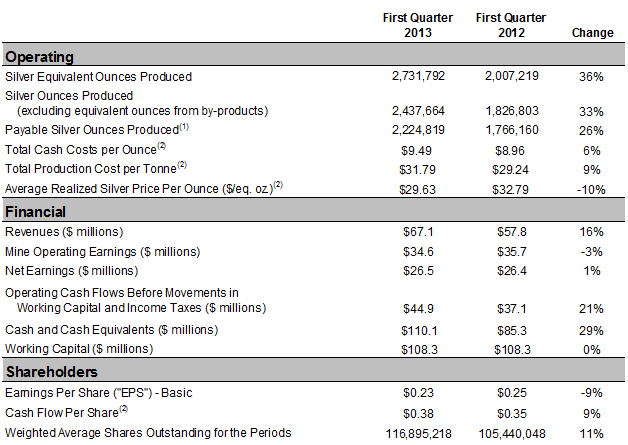 (1) Payable Silver Ounces Produced is equivalent to Silver Ounces Produced less metal deductions from smelters and refineries.
(2) The Company reports non-GAAP measures which include Total Cash Costs per Ounce, Total Production Cost per Tonne, Average Realized Silver Price per Ounce and Cash Flow Per Share. These measures are widely used in the mining industry as a benchmark for performance, but do not have a standardized meaning and may differ from methods used by other companies with similar descriptions.

Keith Neumeyer, President and CEO of First Majestic states, “Despite the recent fall in silver prices we remain committed to aggressively growing our business while at the same time monitoring our investments and our production costs. This year marks a pivotal year for First Majestic with four major expansion projects underway simultaneously. These expansions remain on track and will set the stage for major growth in the coming years. However, we need to be sensitive to the current market conditions and be smart about our use of capital. We are committed as usual to focus on cost reductions and capital optimization without affecting our aggressive growth plans.”

As reported in February 2013, the Company planned to invest a total of $192.3 million in capital growth projects in 2013, of which $86.2 million was earmarked for mine development and $24.5 million towards exploration. Following the recent decline in silver prices, the Company has re-evaluated its company-wide discretionary capital investments for the first half of 2013 and has made several cuts. If silver prices do not improve prior to the third quarter, further cuts in capital commitments will be made. These current cuts do not affect production guidance for 2013.

The Company has earmarked the following capital expenditure reductions for the first half of 2013: The revised $162.3 million budget consists of $81.6 million for plant expansions for Del Toro, San Martin, La Guitarra and the underground rail system of La Parrilla and $80.7 million of discretionary exploration and development for all of the Company’s properties. Of the $81.6 million budget for plant expansions, $19.6 million has already been expended and, for the $80.7 million exploration and development budget, $23.7 million has also already been expended as at March 31, 2013. Therefore, remaining planned expenditures is $119.0 million, which includes $62.0 million for committed plant expansion and $57.0 million for discretionary exploration and development for the remainder of the 2013 budget year.

Furthermore, each of the Company’s on-going expansion projects at the Del Toro, La Parrilla, San Martin and La Guitarra Silver mines remain unaffected as a result of these reductions with the La Guitarra mine already ramped up to 500 tpd in the second quarter and the Del Toro and San Martin mines scheduled to ramp up in the third quarter. Therefore, global silver production guidance remains on track to achieve 11.1 to 11.7 million silver ounces or 12.3 to 13.0 million ounces of silver equivalent in 2013. The Company remains well financed with $110.1 million in cash and cash equivalents on hand at the end of the first quarter, allowing all priority construction and expansionary activities to continue on schedule towards achieving the Company’s estimated 2013 annual production growth rate of 40%.

During the first quarter, the Company completed a full implementation of SAP ERP financial and operational reporting software throughout and integrating all 24 of the Company’s head office and various subsidiaries. This investment is expected to provide enhanced and in-depth real-time analytical tools for operational performance and efficient analyses, monitoring of its operations’ cost accounting and various key performance indicators on a company by company basis and on a consolidated basis.

Total ore processed in the quarter reached 730,357 tonnes, an increase of 31% compared to the first quarter of 2012. The increase in milled ore is a direct result of the successful plant expansion at La Parrilla and the additional ore processed at the recently acquired La Guitarra Silver Mine.

At the Del Toro Silver Mine, the Phase one construction for the 1,000 tpd flotation plant was completed and inaugurated in a special ceremony on January 23, 2013. Phase two construction, which will include the addition of a 1,000 tpd cyanidation circuit, is now in progress. Phase two start-up is expected by July 1, 2013, at which time, the mill is expected to start ramping up to a combined throughput rate of 2,000 tpd (1,000 tpd flotation and 1,000 tpd cyanidation). The cyanidation circuit construction is progressing well with tanks, foundations for SAG mills and platforms for the Merrill-Crowe having been completed, and tailings filter #1 was fully installed and operational. As of March 31, 2013, 30 shipments totalling 933 dry tonnes of concentrates had been shipped. During the quarter, silver-lead concentrates have contained an average of 34% of lead, 4,875 g/t of silver and 1.3 g/t of gold. Further ongoing daily improvements are underway with a focus on daily tonnage, recoveries, quality of concentrate production and other plant optimizations. During the month of April, 12 additional shipments had been shipped containing 371 dry tonnes of concentrates. Production of Zinc concentrates began in May and eight shipments have been delivered containing 225 dry tonnes of concentrates. The Company remains on schedule for the third and final phase of production (2,000 tpd flotation and 2,000 tpd cyanidation) by the third quarter of 2014, at which time Del Toro is expected to become the Company’s largest producing operation, producing approximately six million ounces of silver per year, with significant amounts of lead and zinc.

At the La Guitarra Silver Mine, the expansion of the processing plant from 350 tpd to 500 tpd was completed in April 2013. This new circuit consisted of the installation of a new ball mill, new flotation cells and related infrastructure. The expansion is expected to increase La Guitarra’s output to approximately 1.2 million ounces of silver equivalent annually, representing over one million ounces of pure silver plus a modest amount of gold. Permitting for a 1,000 tpd cyanidation processing facility is expected to be completed in the next few months with an anticipated commencement of construction in the second half of 2013. At 1,000 tpd throughput from cyanidation, production is anticipated to reach over two million ounces of silver doré production per year when completed.

The Company’s third expansion project at the San Martin Silver Mine is progressing according to plan. The current 950 tpd mill and processing plant consists of crushing, grinding and conventional cyanidation by agitation in tanks and Merrill-Crowe doré production system. The plant operates between 850 to 900 tpd, and a plant expansion is currently underway that will see the production rate increase to a planned throughput of 1,300 tpd. The expansion project is expected to be completed on time and on budget in the third quarter of 2013. The Company is planning to release a new NI 43-101 Technical Report very shortly which will include updated Reserves and Resources from the Rosarios/Huichola areas as well as an economic assessment on the current expansion.

First Majestic is a producing silver company focused on silver production in México and is aggressively pursuing its business plan of becoming a senior silver producer through the development of its existing mineral property assets and the pursuit through acquisition of additional mineral assets which contribute to the Company achieving its aggressive corporate growth objectives.