FIRST MAJESTIC SILVER CORP. (AG: NYSE; FR: TSX) (the “Company” or “First Majestic”) is pleased to announce the unaudited interim consolidated financial results of the Company for the second quarter ended June 30, 2014. The full version of the financial statements and the management discussion and analysis can be viewed on the Company’s web site at www.firstmajestic.com or on SEDAR at www.sedar.com and on EDGAR at www.sec.gov. All amounts are in U.S. dollars unless stated otherwise.

Keith Neumeyer, CEO and President of First Majestic, stated: “Production in the second quarter, marking another record, increased for the ninth consecutive quarter. Costs continue to improve and remain a primary focus. The bulk of our capital intensive projects are winding down; some by design and some by choice in order to preserve cash during these challenging times.”

“Looking forward over the coming quarters, we anticipate a continued steady pace of growth with a focus on increasing efficiencies through automation and reduction of input costs throughout our operations.” 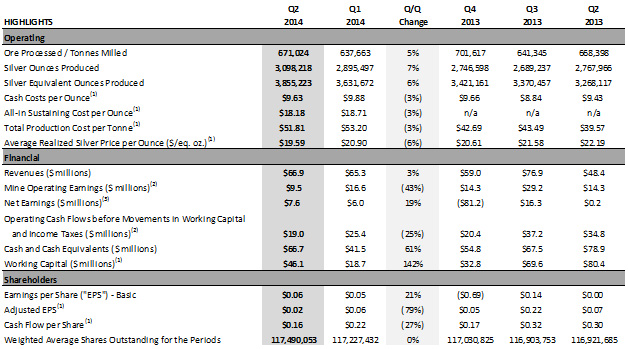 The Company generated revenues of $66.9 million for the second quarter of 2014, a 3% increase compared to the previous quarter primarily due to a 6% increase in production.

Mine operating earnings decreased $7.1 million to $9.5 million compared to the previous quarter. The decrease is primarily due to a $2.5 million write-down of over-valued work in process inventories, a 6% decrease in average realized silver price per ounce and 10% increase in depletion, depreciation and amortization.

Cash flows from operations before movements in working capital and income taxes in the second quarter totaled $19.0 million ($0.16 per share), compared to $25.4 million ($0.22 per share) in the previous quarter. The decrease is primarily due a reduction in mine operating earnings and foreign exchange loss.

Total production in the second quarter increased to a record 3,855,223 silver equivalent ounces (“SEOs”), an increase of 6% compared to the previous quarter. The production growth was primarily due to higher throughput rates at Del Toro and San Martin following each of their respective expansions.

The consolidated average head grade for the second quarter was 212 grams per tonne (“g/t”), relatively unchanged compared to the previous quarter.

Total ore processed during the second quarter amounted to 671,024 tonnes, representing a 5% increase compared to the previous quarter primarily driven by higher throughputs at Del Toro (+21%) and San Martin (+23%).

Cash costs per ounce in the second quarter were $9.63, a 3% decrease from the previous quarter. The reduction in cash costs are primarily attributed to economies of scale from increased production and lower costs at Del Toro and San Martin.

AISC in the second quarter were $18.18 per payable silver ounce, a 3% decrease from the previous quarter. AISC is expected to further decline throughout the second half of 2014 as Del Toro and San Martin continue to improve operationally following their recent plant expansions. Production costs were $51.81 per tonne in the second quarter, a 3% decrease from the previous quarter.

A total of 1,079,122 SEOs were produced by the La Encantada plant during the quarter. This represents an increase of 3% compared the previous quarter.

Cash costs were $8.67 per ounce, unchanged compared to the previous quarter.

The Company’s plan to increase production levels to 3,000 tpd has been postponed due to budget cuts. The $9 million investment, originally scheduled to begin in July 2014, is now planned to begin in the first quarter of 2015. This expansion will include the installation of a new 24’ x 14’ ball mill, which is currently on site, along with the installation of new primary and secondary crushers. The expansion is anticipated to be completed in mid-2015, however, remains subject to budget constraints in the current market. Expected silver production at La Encantada for the full year remains unchanged in the range of 4.1 to 4.3 million ounces due to higher head grades offset by the mill feed rate.

A total of 1,142,433 SEOs were produced at La Parrilla during the quarter. Production decreased by 5% compared to the previous quarter due to an 8% reduction in ore processed.

Cash costs were $5.76 per ounce, a 7% decrease compared to the previous quarter. The reduction in cash costs at La Parrilla is primarily attributed to an increase in by-product credits from higher lead and zinc production.

Total production at Del Toro was 899,710 SEOs, a 12% increase compared to the previous quarter due to higher throughput levels.

Cash costs per ounce were $14.70, a decrease of 11% compared the previous quarter. The decrease was primarily attributed to higher production levels and the decrease of diesel energy generation and the associated generator rental costs due to the connection of the temporary 34kV power line. Cash cost per ounce is expected to further decline in second half of 2014 when the larger 115kV power line is completed and the milling and metallurgical processes stabilize. The construction of the 115kV power line from the State of Durango is expected to be completed and fully tested by September 2014. Once completed, the Del Toro operation will be fully connected to the Mexican power grid allowing for further cost reductions.

A total of 510,697 SEOs were produced at San Martin during the quarter. Production increased by 58% compared to the previous quarter and set a new quarterly production record.

Cash costs were $10.02 per ounce, a 23% decrease compared to the previous quarter. The reduction in cash costs are attributed to higher grades and production levels following the recent plant expansion.

A total of 223,262 SEOs were produced at La Guitarra during the quarter. Silver production increased by 13% to 128,912 ounces largely due to higher head grades but not enough to offset a 13% reduction in total production compared to the previous quarter. The decrease in total equivalent production was primarily due to lower gold credits.

Cash costs were $9.48 per ounce, an increase of 29% compared to the previous quarter. The increase was primarily attributed to a decrease in gold by-product credits.

The Company is maintaining its previously announced 2014 production guidance of 12.7 to 13.3 million ounces of silver (14.8 to 15.6 million SEOs). Due to the revised timing of the La Encantada expansion project, the Company is modifying its expected cost guidance for 2014. Full year cash cost are expected to remain in line with the previous annual guidance of $8.67 to $9.12 per payable silver ounce. However, sustaining costs are expected to increase from the original guidance range of $4.66 to $4.90 per ounce to the revised range of $5.40 to $5.56 per ounce. Including some improvements in general and administration costs and lower share-based payments, the revised AISC per ounce is now expected to be in the range of $16.66 to $16.96, compared to the previous guidance of $15.87 to $16.69.

To date, the Company has produced 6.0 million ounces of silver (or 7.5 million SEOs) at an average cash cost of $9.75 per silver ounce (net of by-products) and AISC of $18.46 per payable silver ounce.

A conference call and webcast will be held today, August 13, 2014 at 11:00 a.m. PDT (2:00 p.m. EDT) to review and discuss the second quarter results. To participate in the conference call, please dial the following: