Plomosas is 100% owned by First Majestic's Mexican subsidiary Minera La Rastra S.A. de C.V. and was acquired in July 2012 as a result of the acquisition of Silvermex Resources. The Company currently has mining claims concessions covering 8,514 hectares.

The Plomosas mining district is historically known as a significant area for silver, gold, lead and zinc production. There are two key areas of interest within the property boundaries are the historic operations of the Rosario and San Juan mines. Extensive facilities and infrastructure are in place on the property, including a fully functional mining camp facility, a 20 year surface rights agreement in good standing, a 30 year water use permit, tailings dam, 60 kilometre - 33 KV power line, 120 man camp, infirmary, offices, shops and warehouses, and an assay lab. As well, extensive underground development at the Rosario and San Juan mines allow rubber tire access to mineralized zones. These existing developments are expected to allow First Majestic to accelerate development at a significant cost savings when it determines to proceed with the project.

The Company is utilizing the mining camp infrastructure to maintain the old structures under care and maintenance. Future plans include the preparation of an NI 43-101 resource estimate and the continued exploration at depth and along strike of the existing known structure. The Company will also collect material for advanced metallurgical testing and, if justified, develop a comprehensive mine plan for the potential extraction of the resource.

A 2001 report by Grupo Mexico states that the Rosario Mine has estimated historic proven and probable reserves and inferred resources of 609,891 tonnes grading 134 g/t Ag, 3.24 % Zn, 2.21 % Pb, and 1.05 g/t Au. According to a Grupo Mexico's internal report dated January 17, 2001, the reported reserves and resources were calculated by Grupo Mexico (IMMSA) by the time they were closing operations at Rosario in 2000. The 2001 report contains longitudinal sections with grades and tonnages but it does not have details about the method or assumptions used for the estimates.

The mine has extensive development and has been partially refurbished by the previous operator in preparation for an 800 tpd operation and has also been dewatered and undergone partial rehabilitation. The historic reserves are located in a number of mineral zones, which include the Veta Plomosas, Plomositas, Lead/Zinc Stock Work and Silver Stock Work. Extensive data collection, underground mapping, control surveys, resource modeling and preliminary exploration programs have been completed by the prior operator. An extensive underground channel sampling program has been completed at Rosario, which yielded positive results with numerous high grade intersections of gold, silver, lead and zinc. The stock work zones have potential for tonnage expansion along the strike and dip of the Rosario fault structure.

The San Juan mine is located near the Plomosas mill site. Extensive data collection, underground mapping, control surveys and exploration programs have been completed at San Juan by previous operators.

The San Juan development consists of a main adit approximately 5 metres in width, 5 metres in height and 250 metres long, a crosscut extending easterly for 150 metres, plus a ramp with a further 150 metres development. The mineralized structure averages 3 metres in width and has been traced down dip for approximately 150-200 metres. A decline has been drilled into the San Juan zone and has been tested over a vertical distance of 40 metres with the zone still open to depth.

*A qualified person has not done sufficient work to classify the historical reserves and resources at Plomosas as current mineral Reserves or Resources. The historic Reserves and Resources at Plomosas do not conform to National Instrument 43-101 for reporting purposes; as such the Company is not treating these historic estimates as current mineral Reserves or Resources. The historical reserves do not have demonstrated current economic viability and are being treated as historical estimates. These estimates should not be relied upon until they have been verified by further due diligence and by the Company's "Qualified Person". In order to verify or upgrade the historical estimates, the Company will need to complete a diamond drilling program consisting of approximately 5,000 metres at the Rosario and San Juan mines. The drilling will confirm the historic reserves and resources reported by Grupo Mexico and will allow the Company to plan a second exploration program focused on locating extensions of the known mineralization. 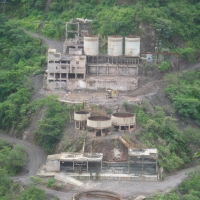 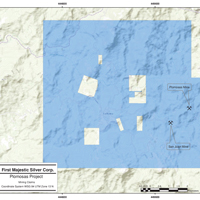